You may have a different view on the Subject, so your Comments will help me think differently.

Support us with a Click at the below link. Register your Church.

Ask and you shall receive

He must have been around 14 years of age, and on the second visit to his hometown. The following morning at dawn, he saw a huge gathering marching down from the Market place to the Town Hall. 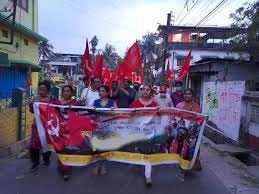 All were disciplined soldiers holding their red flags as they marched in front of the property where he stood skimming the street.
He asked his cousin what it was all about, who just brushed him off, saying that this was a daily routine, by the Commies on a new demand. He was not clear what the demand was.
They all seemed to say, what they ask for in front, we at the rear also need.
There were No Microphones or Loud Speakers those days. The year was 1967, and this was the chorus until the procession ended.

Sometimes in life we too follow others, not knowing what we really need.

It all began when they played the traditional Game of Numbers.
A game played as kids, but he had changed it in unknown ways and this got her all excited. Playing the Game with the rest, at times she brought in her family too...
she was on a Cloud

Soon they got chatting, finding common interests. It was her quick wit coupled with her old world charm, that redefined 'The Law of Attraction'. As a wordsmith, he knew his way with words. But there was a wild side of him, the magical and sensual side, and this helped nurture the relationship further which helped her rise, for
she was on Cloud 9

His family was Roman Catholic and so was hers, where Sacrifice, Servitude and Tradition were the hallmarks. However, it was impossible to believe a person can exist on these qualities alone, when their wild nature is stifled down. He never let his be floored, and neither did she. Sparks lit their space and now
both were on Cloud 9

As humans we all are multi dimensional, and we need to explore all these dimensions too. Surely there is a place for Tradition and Sacrifice, and another for the New Love of your Life. When we carve a path that allows us to express ourselves without shame or fear of judgement, is where we find Peace & Joy. Getting in touch with that side was a beautiful and a painless discovery which both continued to nurture and
both loved to continue to be on Cloud 9